In 2004, my 5 year old stopped and yelled back to me from his scooter. On seeing his new school in our adopted home of Niagara-on-the-Lake, Canada he cried “it looks like a gaol”!

It was the first stomach sink for this earnestly biophilic (nature-loving) Mum. The initial view took in blank brick walls, asphalt, fences, barred windows and a grassy field.

So concerned was I that my normally rural, barefoot, tree climbing, tadpole torturing, Aussie outdoor rascals might be restricted by the long winter weather, influenced by sense of cultural appropriateness away from outdoors – I resorted to sneaking in huge limbs from fallen trees into the school yard on weekends…..

After that, there were failed attempts at bringing in “stepping stone” logs into the playground (too dangerous). The veggie garden I laboured in with the Grade 3’s was wipper-snipped completely to the ground one summer by School Board contractors. No murals could be painted on any walls (a union matter), no snowball throwing in winter (eye injuries).

Finally, the mood shifted and I felt a sense of vindication as Richard Louv launched the Children and Nature Network in 2006 following the incredible success of “Last Child in the Woods”. So at last I wasn’t alone. He toured the continent and I furiously scribbled notes. The 2008 US Leave No Child Inside Act was passed, the American NFF came up with “Green Hour“. In the media at least it appeared that the shift was occurring.

But the greatest shift in my family came from a simple concept. Trust. We couldn’t manipulate the thinking of educators at that time, in that place, but we could trust that our family values of outdoors, nature and freedom would endure. It didn’t have to come from a campaign, from education materials, the media or any other external source.

It came from within. Most of all (through yoga, reflection and mindful practice) somehow we learnt to trust that our kids could find genuine wild spaces to occupy and arrange their own company with similarly-interested friends. And as soon as that happened – voila, a local creek emerged and transformed to magical kingdom status.

Without us they met friends, assembled fishing gear and found fish. They discovered (and were smart enough to avoid!) a coyote den. It was our youngest (then just 8) who dragged us down to share a newly beaver-chewed maple grove. We seemed to imperceptibly adopt the creek from then on – I skated on ice sheeted ponds along the water way edges through the grey February “blahs”, they geocached like mad and our dog hauled himself through snow banks twice as deep as he was high. It became “our place”. 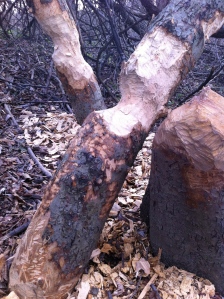 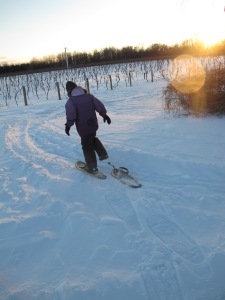 So this Nature Play week, the best reflection/learning we’ve picked up in now a decade of fighting our own “nature-deficit” disorder has been not to.

Not to be overly earnest in our neediness to get them back into the bush. Sure we’ve looked at the “51 Things to do before you’re 12″  but none of us can recall the few things that haven’t been completed. I’m sure they’ll be part of our kids lives in times to come.

We have made conscious choices not to be driven by fear nor lament what might be being lost as their childhood years go by. They are but a product of their times. If we conjure up too-strong a sense of neediness or scarcity, this plays right into our modern anxiety-riddled, helicopter-parent psyche. It might directly contribute to holding us back.

I get a sense we shouldn’t make our loss too explicit, though it is very real. I want instead to teach our kids about forgiving what is now and visualizing a preferred future.

So trust. Sit a minute with a child. I guarantee you if you sit for long enough even in the most built-up of city conditions your child can still recognize and delight in the sound of a bird calling. It’s still there, it will always be there. But it’s sound can only be heard if it is truly what YOU value and what you’re willing to do (or not do!) in order to hear its song.

Posted by adelaidesphere in Uncategorized